As I have mentioned I regard hobby activities as little contributions to the GRAND fictive story. Here is another little note, a conversion mock-up, or a 3D-sketch, call it what you want.

"...Silently, I watched him as he strode on the path to damnation..."
The main character is the bird creature. Will need to trim the ghoul head slightly to make it work. Also, the sorcerer needs some wargear around his waist to bulk him up a little. That chaos sorcerer sculpt is just so cool, as is the head from the necromancer model. Love these new plastic kits.
Posted by JRN at 11/30/2011 09:42:00 AM 1 comment:

Following yesterday's bitz round-up here is a close-up on the main idea:

Not finally decided if I am using the Emperor's champion for the main model or trying to find that plastic Chaos sorcerer who seems to go into hiding every time I have a project that might involve him. I am really happy about the bizarre look the ghoul head adds to the falcon. For the person holding the little imp I will try to find a head that somehow adds to the brooding look of the gargoyle, but without stealing the focus.
Posted by JRN at 11/29/2011 08:45:00 AM 4 comments:

Today I had one of those fantastic hobby moments where you grab a single bit and think: "This would be so cool with a quick head-swap!". From there I just worked at random through a box or two and found the rest of the pieces for the conversion. Before showing it I want to play a little around with parts of the mini and try a few alternatives here and there, but the general idea was formed by a single plastic bit that just asked for a change.

More work down on the daemonhost. Painted the flesh using two shades of pink, white, and some inks. This is a seriously big figure with a lot of flesh - took some time to do - but it was fun to explore building the colours over the black/white-zenith undercoat. The black primer shading shows effectively through adding a nice sinister grey shade in a few places. But first some moody images of the figure. The lower half is still to be finished but with some cropping we still get some nice shots...

Recently I have picked the Inquisitor Rulesbook from the shelf. I read a few pages, looked through the mini-section, and I turned the book and looked at the barcode on the back. Actually, I did these things in the opposite order. Grabbed the book to look at the code:

Such a cool detail. I remember when I first noticed that particular minuite graphic wonder.
I love great details. And I like to hunt for them. That has to be a new tag - detail hunting.
Posted by JRN at 11/22/2011 10:49:00 PM 9 comments:

Recently, I deviced a treasure hunt for the birthsday party for one of my children. Had to use both hobbys skills, basic planning, plus creating a story-line for the activities. Being semi-hobby-like I thought is was worth sharing.

The theme was I did make a treasure hunt but the treasure has been nicked by... a troll!
Everything was bound together by a story of a troll that had stolen the treature and left little notes with ryhmes to tease and scare the persuers. Worked out alright and the handouts were fun to make. Seriously large-scale stuff! The silly Troll-ryhmes are in Danish - probably a good thing.

-Planning, figuring out what goes where, when to do what, and so on...

-The finished handouts for the treasure hunt. Apart from these items I used a piece of old cloth tied into a pouch to hold pens and colour pencils. And the Treasure itself obviously.
Apart from start (Oh NO! The treasure has been nicked.. and all I found was this strange golden stone...) and finish (the treasure) we had 3 stations during the hunt. After the start there was a drawing exercise - the children were to draw themselves on little pages that would later become a booklet (by which to remember the event). Then there was some activities on a playground and a word-puzzle using the stones with letters. Next up was a ryhme-challenge where the children made a ryhme to scare the troll and from there they found the treasure using the map on a stone.

Planning the stuff was hardest do to. The trick was - it seems - to make up (or copy) ideas for individual activities. I wrote them down individually on a little piece of paper. When I had the number of activities needed, I worked out how to connect them with clues and handouts.

Materials used for the handouts: Paper for scrolls. Thick paper for drawing (sheets of A4 each cut into four pieces, I used a nice 180 g/m2 aquarelle paper), and a single black sheets for the booklet cover (also cut into size). String for scrolls and other stuff. A pouch or similar with crayons, pencils, etcetera. Stones. Gold Spray. Black and red paint + brushes. Instant Coffee for weathering - both in mixed and powder form. And more instant coffee for standard use.

First Fantasy model finished in a while. Now, as I have mentioned photography styles in my past writings, I believe it would be obvious to give the current pics a few comments:

These pictures have been done using an annonymous grey backdrop instead of the classic blue-white. I like this because it isn't a specific colour, leaving the mini to shine by itself. The blue-white backdrop usually gives better colours, but sometimes the brightness of the blue-white transition adds such a strong visual expression to the picture that the model can get a little lost - even if it is very well painted.
As a final note I might add that I do not have any matching fantasy terrain so a moody shot is sadly not an option. Oh, there are more angles in the Gallery section on : www.jrn-works.dk
Posted by JRN at 11/15/2011 10:30:00 AM 6 comments:

I love images of painting sessions:

The way the paints move around on the table, the intuitive colour choices that follow a general plan but also add a slight variation to the overall look. At least that is the way I paint when I enjoy the hobby the most. Playing around with colours, mixes, and sometimes taking that brown shade for the axe shaft somewhere else...

We see it all the time. Photographies cropped close around the motif to create a focus the story which the picture is illustrating. It's in the newspapers and allover the web. But not in the mini-world. The standard seems to be that you have to show the whole model. So what it the focus? What is the "story" of a picture of a miniature shot on a blue to white backdrop with neutral lighting?

Don't get me wrong. I love the classic studio-style miniature portrait, which is more a presentation of the whole mini (not to mention the paintjob), but I also love photographs of miniatures where the camera moves into the world of the miniature so to speak. I am no photographer, but I experimented a little with my photography earlier this year. Close shots, cropped closer, and a little photoshop-action. More mood, less blue-white backdrop: 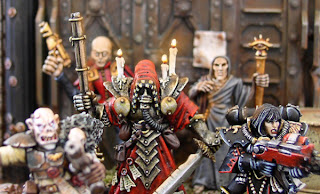 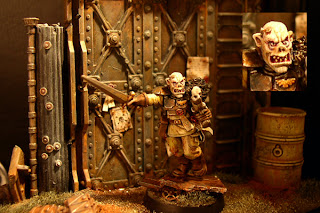 Paint phase #1 on the daemonhost

The big areas of flesh asked for experimentation. Painting was done over a zenith-style applied spray-priming. Primed in two goes - black from underneath and white from above. Over this I tried mixing Winsor & Newton gloss varnish with The old Citadel Elf Flesh plus some white for the base colour. Painting with this transparent colour the transition shows through leaving a subtle dark grey shading. Adding the gloss varnish gave a slight shine to the colour and also resulted in a very smooth surface. Over this I added colour using various inks - Citadel, Vallejo, W&N, and I have started adding some highlights. That is the flesh so far: Still a lot of work to do on the flesh. On the rest of the mini I have just blocked colours in and added some washes to darken the areas. For the overall colour scheme I am planning towards a mix of black, white, gold, and flesh ... with a hint of purple, and finally with a strong but weathered yellow dominating the base. I'm really with the direction of the paintjob so far and I look forward to see where it will go from here.
Posted by JRN at 11/07/2011 08:40:00 PM 9 comments:

The sketch that partially got me into bringing my writing and process ponderings into the public. A quick drawing to get ideas on converting the new plastic wizards from GW released Summer 2011:

Lady on the right has been converted and painted already, the servo-skull colector on the right is halfway converted, while a conversion based on the recently released plastic Nurgle Lord is the current painting project. 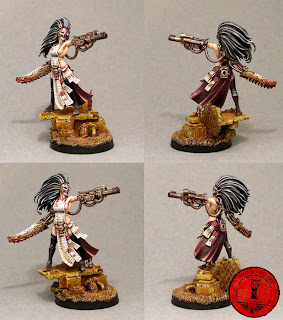 For the mentioned Nurgle Lord I wanted to play with the massiveness of the miniature. To both contradict and underline this I changed the bulky standing pose into a disturbing floating daemonhost: 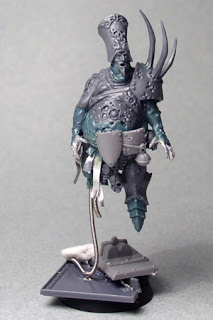 A text to test. Also a text to rewrite in another text.
Very much like my miniatures - I like to revist and rewrite stuff.
This blog is the place for dialog and random musing about my miniatures and hobby stuff and oppinions in general.
Frist thing to rewrite - is the layout and settings - therefore this first text to test.
Posted by JRN at 11/06/2011 10:23:00 PM No comments: