Yesterday a Chaos Warband attacked a travelling mercenary band moving through a graveyard district in outskirts of Mordheim. The Chaos force won the day, but the Tzeentch Sorcerer was slain in the heat of Battle while the Nurgle Blightkings delivered the final punch to drive the mortals away. 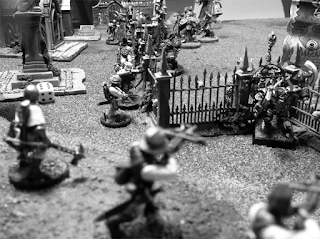 Using my newly made modular terrain I grapped 2 squares (2x2 foot x2) and together with my son and youngest daugther we arranged a few scenic bits to set the scene. Then we had a game over the board using my mordheim Reiklanders Warband agains a Chaos force picked from an old Tzeentch army (early 1999) and added some Blightkings and a Sigmarite Liberator. Gaming with my kids I let them decide on forces - this really makes them commit to the models with the dice begin to roll.

We used a simplified Mordheim rules set - I decided the dice-rolls and number of life-points for each models. We have played a few times before, but this was the first on proper terrain. For next time I want to try out the Age of Sigmar game mechanics. I plan to prepare statsheets for each group - just by printing the PDF and cutting the paper to a nice size to keep at the board and reference during gaming to the kids learn to control their own models. Should be good! The terrain really made the game fun and dramatic - it looked really cool and definately made the children engage more in the game.
Posted by JRN at 12/20/2015 01:23:00 PM 9 comments: 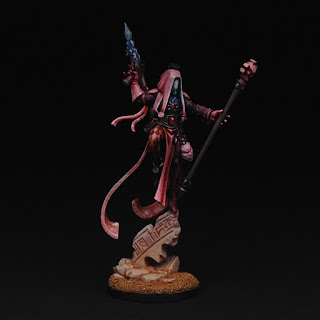 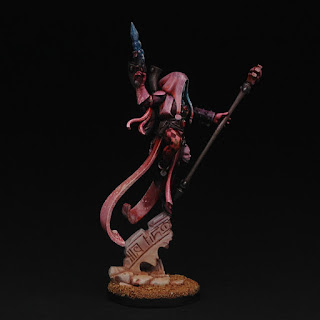 My travellings into the magical domain of the Eldar race took off in Spring when I joined the Invitational at the Iron Sleet blog back in Spring. Now I have worked on, developing the language of this sinister and mysterious race further. Fittingly, my recent Harlequin model, the Shadowseer, was posted on the Iron Sleet earlier today. The Iron Sleet crew have been doing Eldar interpretations the past month, so obviously the inspiration has been flowing back and forth bringing drive and enthusiasm. Thanks. And let's create some more!
Posted by JRN at 12/13/2015 10:12:00 PM 4 comments: