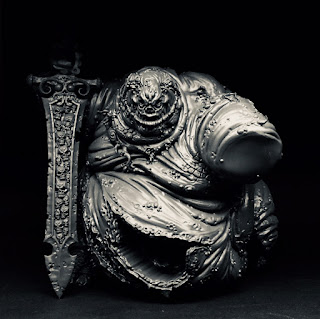 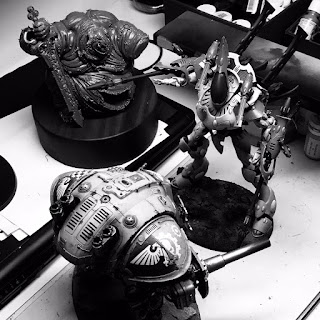 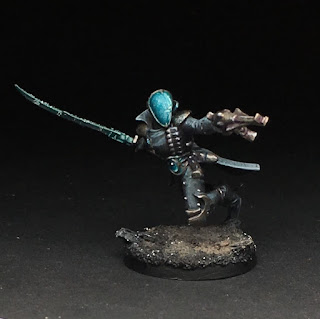 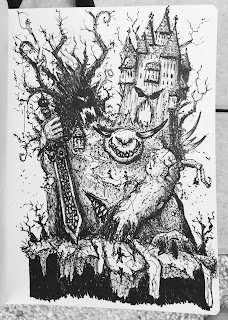 The final installment of my Cult of the Possessed Warband, the whole gang in all it's glory. 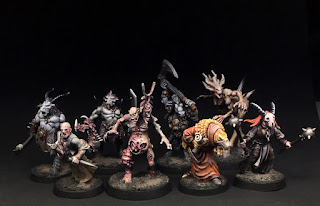 I am so happy about this little project. A great combination of producing models for gaming and exploring the imagery of Chaos taking shape in the Damned City of Mordheim. The gaming is a nice bonus, and especially this kind of warband makes for easy gaming; no shooting business and carefully moving models around to avoid getting charged. Just push the models around to get into combat and roll some dice. Plain and simple fun.

Also, to cover the last models I have detail pictures of my mutant hero, and the lone crazed darksoul in the warband. 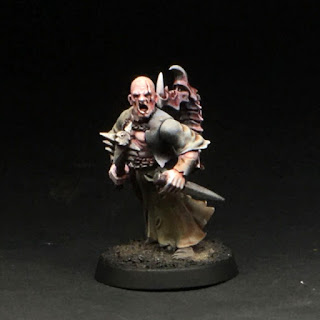 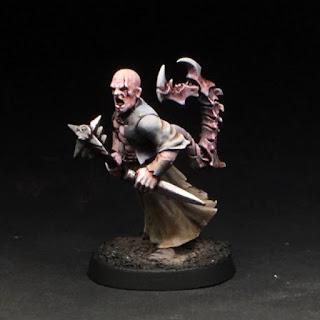 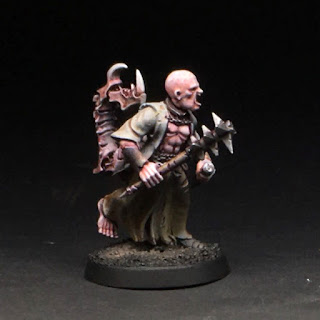 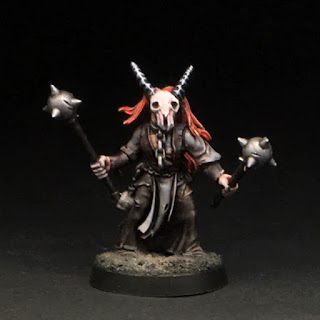 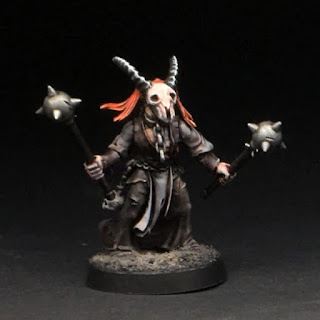 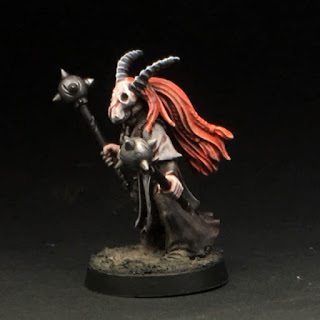 Email ThisBlogThis!Share to TwitterShare to FacebookShare to Pinterest
Labels: Chaos, Cult of the Possessed, gaming, Mordheim

Mordheim: The Possessed, the Deamons

Next up comes my favorite miniatures for the warband - the daemon beasts that are the Possessed. 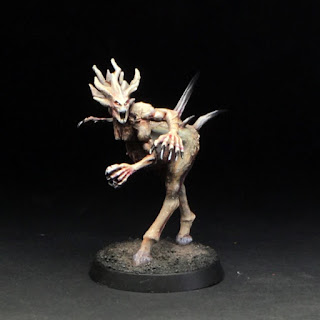 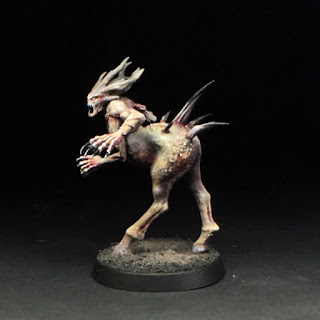 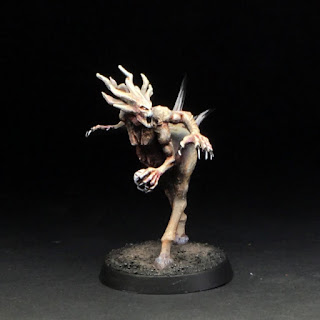 Conversion based on Dryad head and chopped up torso, ghoul arms, glade rider hose and random spikes from the bitzbox. I really love the feral and sinister appearance of this beast. Painting these miniatures I am relying on the preshading and stippling techniques used on my Pilgrym daemon conversions from last year. 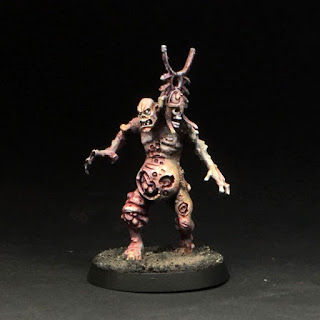 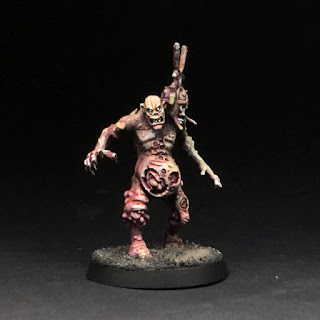 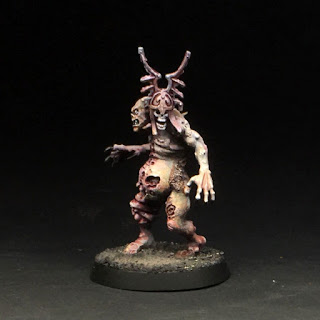 A more simple conversion for this one but still quite effective. Ghoul head and a skeleton graveguard head on a Plaguebearer body. Again, I go to the ghoul sprue for arms. Same semi-random painting technique as above.
Posted by JRN at 4/16/2017 02:03:00 PM 14 comments: 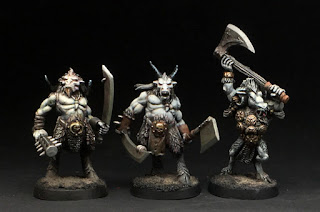 3 henchmen for my Cult of the Possessed warband.

They are all painted using a "zenith lighting" primer technique. Basically, each model is primed black first, followed by white primer sprayed from a 45 degree angle from the top of the miniature. This creates natual "highlights" (the white primer), or pre-sharing (the black areas not hit by the white primer). Call it what you want.

The big trick here is that you can then work shades and washes over the surfaces creating intanttly shaded AND highlighted areas. So in the case of these beastmen being white, for their skin I added subtle shading of purple and pink tones around the mouth and eyes, and some yellowish light browns around the main muscles to blend the transition between the white and black pre-shading. I always re-emphazise the highlights and sometimes the shading also, but the midtones areas can be left finished after that initial wash.

I am really happy with these chaos beasts. Currently, I have the two beastmen with 2 weapons each fighting as henchmen in my warband. Now if only one of these could make it to become a hero in the next advance roll...
Posted by JRN at 4/14/2017 09:37:00 PM 13 comments: 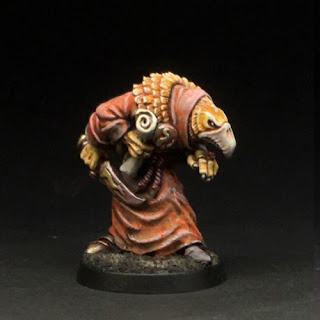 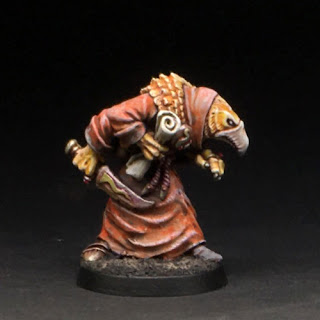 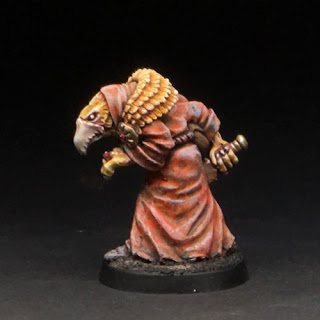 My Chaos Magister which has had at least 5 different colour robes before I settled for this dirty orange.
Actually, I painted him a while back but was never really satisfied with the paintjob. So when I started recruiting models for my Possessed Warband I thought of it as an opportunity to get the paintjob right. 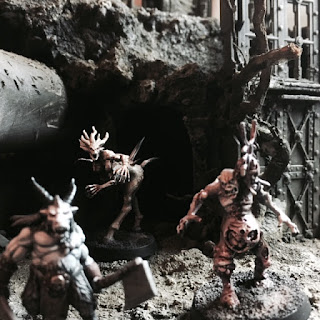 My Cult of the Possessed warband emerging from the caves beneath the city.

Recently, I have been getting into gaming regularly and prepping for games. I have built a small force of Chaos Possessed: A few beastmen, a magister picked from the drawer of half-finished stuff, some henchmen, mutants and two Daemons. The image above features the deamons and the first beastman painted. Also, the terrain is actual the one half of the Pilgrym gaming board, the old Botanicarium. A nice setting that works nicely as a Mordheim backdrop. 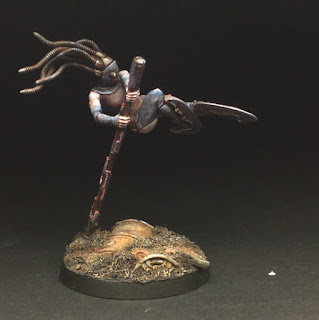 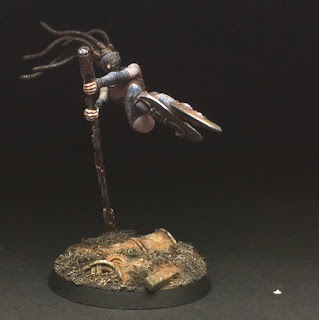 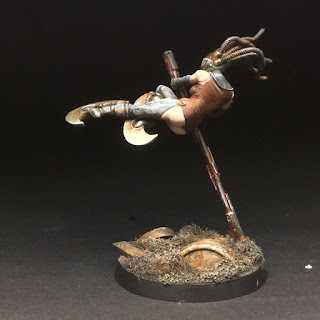 Just finished this model for a friend. Siouxsie by Hasslefree Miniatures, a seriously dynamic 40 mm sculpt. Considering the scale I decided to go strong on contrasts, but also to go bold texturing the surfaces. An overall painterly approach.

It is a beautiful sculpt without very much detailing. And I really wanted to emphasize the wonderful shapes rather than adding lots of tricks and techniques.