The forgotten Oak - Paintjob and Process 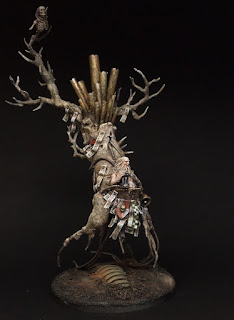 We showed my lastest Pilgrym model on ironsleet.com yesterday. But I also want it shown here.

The model is almost finished. Still need to add servo skulls, and a bit of tweaking colours with the rest of the warband. The post on the Pilgrym-site produced a lot of great comments asking into the process, the actual building of the model, and the mindset behind the concept. 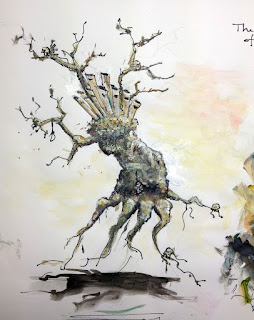 Thoughts on starting on a project with several uncertainties...
Getting from the concept sketch to the model took both courage and compromises. Especially going from the open 2d-concept with a lot of suggested details to actually building the model deciding on all shapes and details was a great process.

The sketch had very few explicit details, so making the model took a lot of bitz research and texture exercises. But at some point it was just about committing and running with the idea…

When building bigger models like these I find myself going through phases of sketching, planning, sketching again, collecting bitz, frustration, thinking, and finally: Gloves off! Just get stuck in!

A word of advice would probably be to try to get ”stuck in” as early as possible. 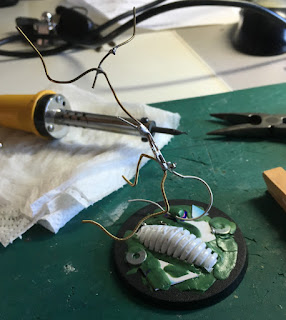 Modelling the Tree
Building the tree I used wire-frame for the main branches for strength and balance issues. For this model it was important with the wires because I wanted the tree floating along.

Around the wire-frame I added a layer of green stuff for extra stabilty and oon top of this I mocked up the main shape simply by using tinfoil that I worked roughly into place. 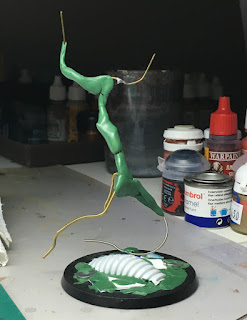 Over this I added modelling putty to get a solid outer layer. Actually in a few places there is still access to the inner tinfoil core. From here I started to add the thinner branches using cut up dryad bitz. These were glued into place with superglue.
On top of this “aggrax earth” – the technical crackling paint from GW – thin in some places, thicker in others. And a few places were left bare. 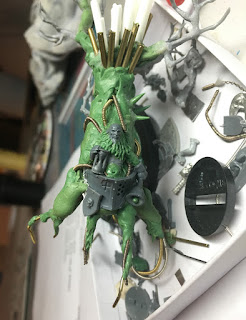 Going into ”production”...
For a tree production setup for a Mordheim table or similar I’d recommend that you cut down the process to make it easier and faster.


Maybe take out the greenstuff layer and work out something else to get the same effect. Try wrapping the tinfoil with a layer of thin bandage rolls and seal it with pva glue. And if you go this route – maybe the texturing step can also be replaced by sprinkling fine sand straight onto the glue. That combines two steps and saves time…

The mood of the model
Getting praise for a miniature is always fantastic, but the wording of the comments is pretty interesing. I always appreciate when fellow hobbyists take the time to add a comment - it is extremely encourageing and makes you want to produce more and improve your skills. Words like beautiful and perfect are the ultimate compliments, but the really interesting thing is the meaning behind the words. 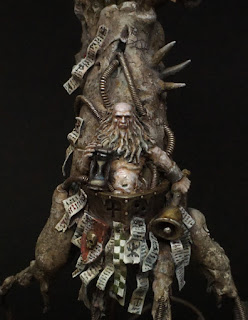 Is this miniature perfect? Technically it might be and it might not. Depending on your goal. I think it has the perfect level of openess to it. The model suggests a mood, rather than spells it out. And this is what I strive for in my miniatures these days. I what you to look and think and look again when you see the miniature. To activate memory and imagination, think back to other models, pieces of art, places and moods. That is the goal. And if I suceed I think the miniature can be called both perfect and beautiful.
But it is getting that mood and imagination going that makes it so...