Recently, I deviced a treasure hunt for the birthsday party for one of my children. Had to use both hobbys skills, basic planning, plus creating a story-line for the activities. Being semi-hobby-like I thought is was worth sharing.

The theme was I did make a treasure hunt but the treasure has been nicked by... a troll!
Everything was bound together by a story of a troll that had stolen the treature and left little notes with ryhmes to tease and scare the persuers. Worked out alright and the handouts were fun to make. Seriously large-scale stuff! The silly Troll-ryhmes are in Danish - probably a good thing. 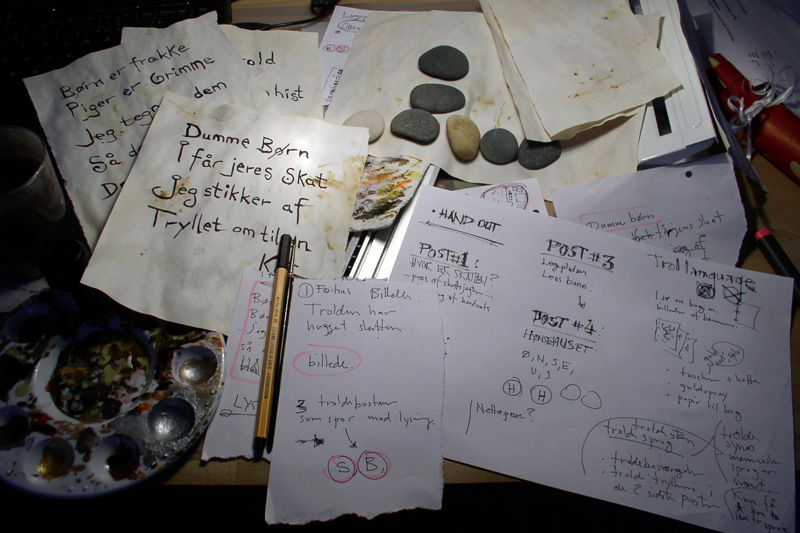 -Planning, figuring out what goes where, when to do what, and so on... 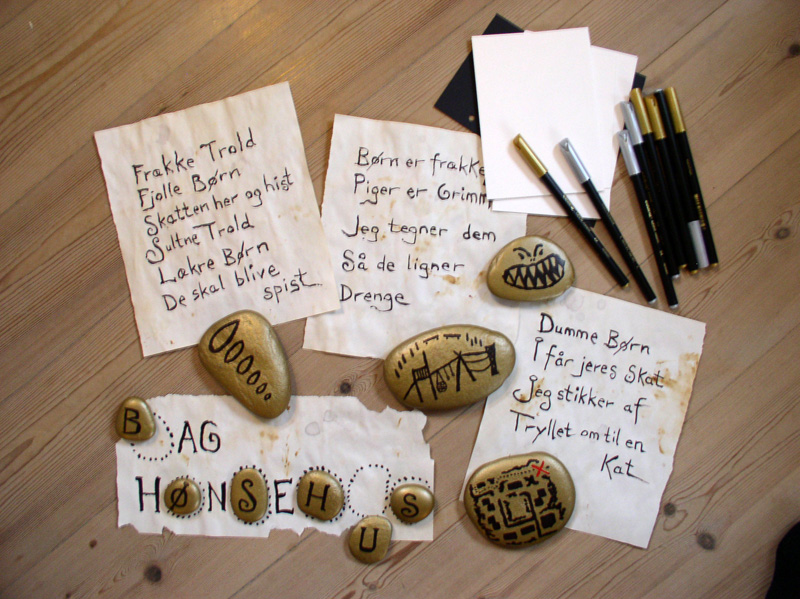 -The finished handouts for the treasure hunt. Apart from these items I used a piece of old cloth tied into a pouch to hold pens and colour pencils. And the Treasure itself obviously.
Apart from start (Oh NO! The treasure has been nicked.. and all I found was this strange golden stone...) and finish (the treasure) we had 3 stations during the hunt. After the start there was a drawing exercise - the children were to draw themselves on little pages that would later become a booklet (by which to remember the event). Then there was some activities on a playground and a word-puzzle using the stones with letters. Next up was a ryhme-challenge where the children made a ryhme to scare the troll and from there they found the treasure using the map on a stone.

Planning the stuff was hardest do to. The trick was - it seems - to make up (or copy) ideas for individual activities. I wrote them down individually on a little piece of paper. When I had the number of activities needed, I worked out how to connect them with clues and handouts.

Materials used for the handouts: Paper for scrolls. Thick paper for drawing (sheets of A4 each cut into four pieces, I used a nice 180 g/m2 aquarelle paper), and a single black sheets for the booklet cover (also cut into size). String for scrolls and other stuff. A pouch or similar with crayons, pencils, etcetera. Stones. Gold Spray. Black and red paint + brushes. Instant Coffee for weathering - both in mixed and powder form. And more instant coffee for standard use.